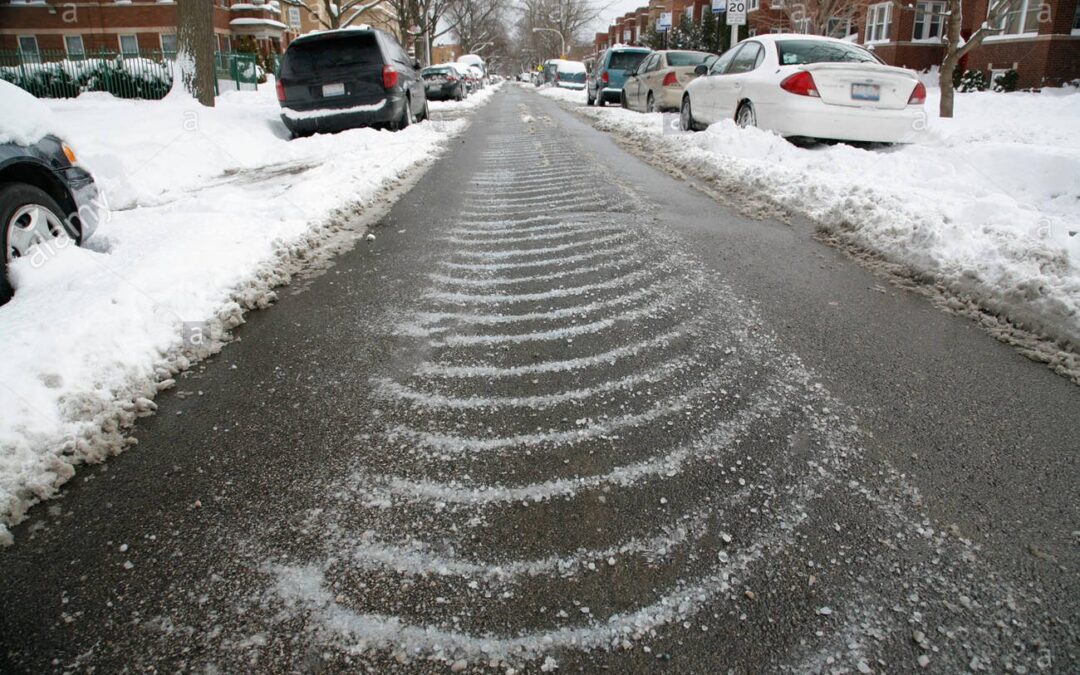 What is Winter Road Salt? 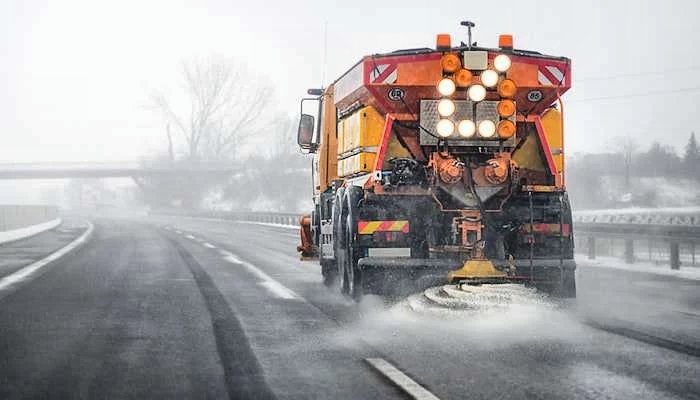 A salt truck de-icing a highway
Road salt, otherwise known as de-icing salt, is typically just sodium chloride crystals — the same as table salt, but without the addition of iodine or anti-caking agents. Road salt is also a lot coarser and the crystals are much larger than table salt, and is sometimes called rock salt.

It also isn’t as pure as what you use on your food — sometimes it has a brownish gray color, mostly due to mineral contamination and other additives, depending on the brand.

What Do We Use Road Salt For?

Road salt is used to help clear the roads of ice.

During the winter months when there is heavy snowfall or freezing rain, ice can form on roads and highways, which can cause slippery driving conditions, and increase the risk of potential accidents. Road salt is used to prevent the formation of ice in these conditions. 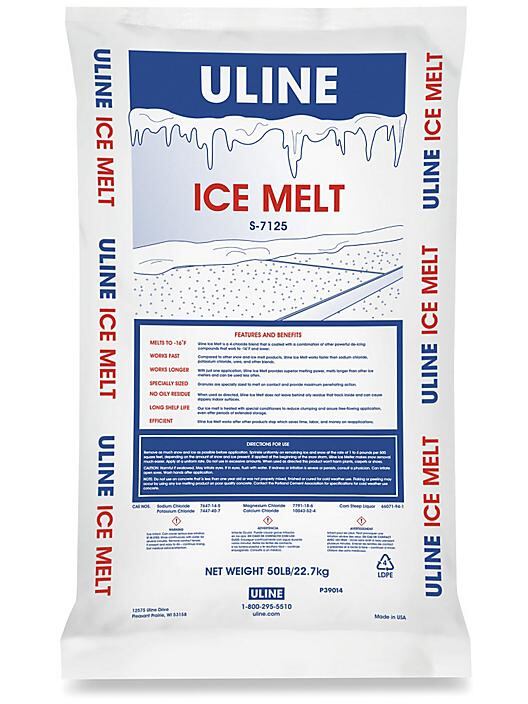 A bag of de-icing salt
Road salt is also typically sold in 25 kg bags for homeowners and businesses, and can be used on walkways and sidewalks to prevent the formation of ice in order to make it safer for pedestrians.

How Does it Work?

It is generally known that road salt, when scattered on roads, will help prevent ice formation, making for safer driving conditions.

The prevention of ice formation is a result of a chemical property known as freezing point depression.

Freezing point depression simply refers to the decreasing of the “freezing point” of water. Pure water freezes at or below 0° Celcius (32° Fahrenheit). Generally, when a solvent is dissolved in water (such as sodium chloride, or salt), the freezing point of water drops, and the temperature at which liquid water turns to ice is reduced. The sodium and chloride ions interfere with water molecules’ ability to bond together to form ice.

Simply put, road salt impedes the ability of the water to turn to ice at temperatures below freezing.

It’s worth noting that road salt loses its effectiveness at temperatures below -10°C (or 14°F) — but at this temperature, the ice is not as slippery.

Subjecting the environment to this salt via runoff can have some unintended consequences including negative effects on plants, aquatic animals and wetlands. 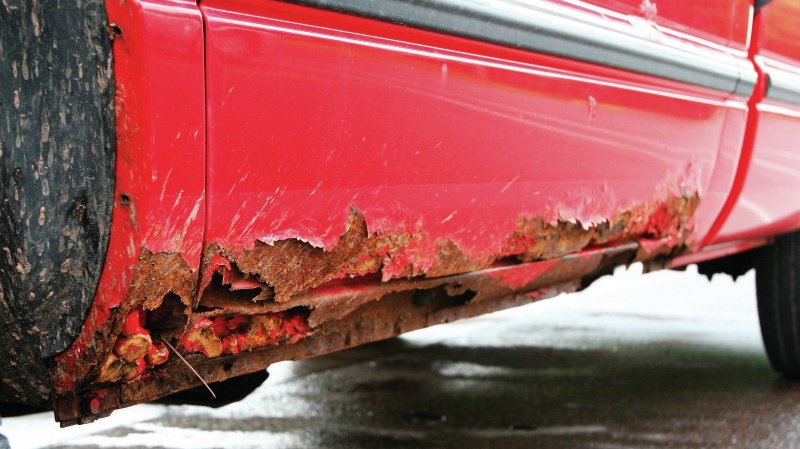 Corrosion caused by road salt
Road salt contaminants can build up at the bottom of lakes, causing a depletion of oxygen in the water, which then becomes detrimental to fish and other aquatic life. When the water is contaminated in an ecosystem, the effects become detrimental to surrounding plant and wild life as well.

Also, as most of us are aware, road salt is corrosive, as attested by many car owners. In addition to vehicles, road salt is also corrosive to roads, bridges and other infrastructure.

Road salt has been known to make its way into our drinking water. A notorious example is the water supply for Flint, Michigan.

In 2015, Flint, Michigan’s water supply was found to be contaminated with high levels of lead — a neurotoxin. The lead contamination was a result of runoff from lead pipes throughout the city’s plumbing system — and this runoff was caused by high chloride levels in the water. The primary suspect behind the elevated chloride levels in Flint’s water was (you guessed it): road salt.

Many communities in North America are now looking for alternatives to winter road salt.

One alternative that is being intermittently tested is the use of a brine solution, instead of rock salt crystals. This involves dissolving the road salt into a water solution prior to dispersing it onto the roads. Doing so reduces the amount of road salt being used on the road surfaces, effectively saving on the cost of the salt itself, and reduces the amount of salt buildup in the environment. This alternative does not completely eliminate the problem of long term environmental contamination. 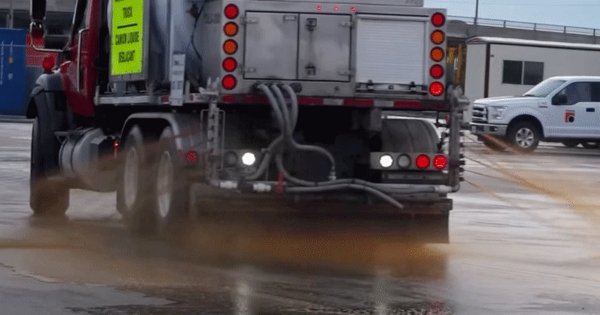 De-icing the roads with beet waste-water
Some other alternatives being tested is the use of sugars instead of salt, which in fact causes an even greater freezing point depression than salt. Sources being tested are molasses, and the by-products of sugar beet processing, otherwise known as beet waste-water. Dissolving sugar based waste-water can reduce the freezing point of water to below -20°C. There are some drawbacks to this method of de-icing, however, as some communities report a fowl smelling odour. Sugar deposits can encourage bacterial growth, which may be the cause of the fowl odours.

An alternative we’ve all seen is the use of dirt or sand on the roads, which doesn’t inhibit ice formation, but rather creates friction on surfaces with ice, which improves vehicle traction. The drawback of course is that dirt and sand can make the roads and environment very dirty.

One of the most promising de-icing alternatives is the use of solar panels within the roads to generate enough heat to prevent any ice build-up in the first place — keeping the pavement at a temperature above 0°C at all times. Using this method doesn’t produce any environmental contamination at all, and keeps our drinking water and vehicles free from salt and chloride buildup. Besides the extra costs involved in this setup, it is dependant on the solar panels receiving adequate sunlight, and is ineffective if the weather conditions are cloudy or overcast for long periods of time.